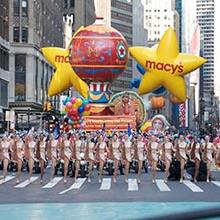 This tour has sold out.

Since 1924, the Macy’s Thanksgiving Day Parade has been the official kick-off to the holiday season. Every year, the Emmy Award winning tradition is seen by more than 3.5 million people in New York and 50 million people at home, all tuned in to see the famous big balloons, a collection of amazing performances, and one-of-a-kind floats. And now you can join fellow Spartans to see one of the most popular events in New York City, firsthand. This exclusive tour includes 3-nights at the Le Meridien New York Central Park hotel, VIP parade viewing at the JW Marriott Essex House Hotel Grand & Petit Salon located on the parade route, unlimited use of a 7-day MetroCard for New York subway public transportation, $100 restaurant voucher, entrance to a Broadway Show and more.