Feature: I was Born to be a Spartan 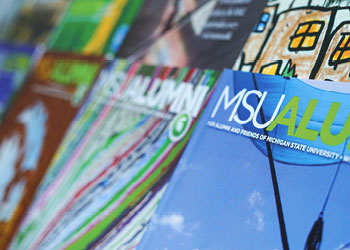 I WAS BORN TO BE A SPARTAN

The Spartan Hall of Famer explains why he chose MSU, assesses Jud Heathcote's coaching and recalls the 1979 NCAA championship season.

The whole town of Lansing got involved in trying to influence me in the direction of State. Black, white, it didn't matter. I'd be putting on a clinic at a local playground, but instead of basketball, all the kids wanted to talk about was where I would be going to college. My parents, too, were hoping I'd choose State, and so was Coach Fox. But they all made it clear that this was my decision, and that they would support me no matter where I went. One of my concerns about State had to do with the coach there. Gus Ganakas, then the head coach, was fired before my senior year at Everett, and that changed everything. I'd been friendly with Gus and was looking forward to playing for him. The new coach was Jud Heathcote, a short, hot-tempered guy who reminded me of a bulldog.

While Heathcote had been at MSU only a year, and I didn't really know him, I saw the way he yelled at his players, and I didn't like it. As I was getting close to a decision, Heathcote came to see me. 'I know that you've narrowed it down to Michigan and Michigan State,' he said. 'It seems to me that your head is saying Michigan, but your heart is saying State. Michigan is a great school, no question about that. And they have an outstanding team. But if you go there, you'll be one of several great players. And with your height, they'll probably have you playing center. 'You're not a center, Earvin. I've seen you play, and you're definitely a point guard. I want you to run our offense. I see you as the key to our fast break. Greg Kelser can really move. You've seen him play, so you know how good he is. I'm telling you, he'd be even better if you were running the plays. If you came to Michigan State, you'd make a tremendous difference.'

When Heathcote left, I thought about what he had said. He was certainly right about the battle going on between my head and my heart. I had been going to games at Michigan State since I was ten -- and not just basketball, but football games, too, watching the Spartans in the rain and the snow. That night, I dreamed that I was in Jenison Field House at Michigan State. The arena, which holds about ten thousand people, was filled with screaming fans. I had been to dozens of games at Jenison when the place was mostly empty. But in the dream, I was running down the court in a green-and-white uniform. And the whole crowd was on its feet cheering.

The next morning I had a visit from Vernon Payne, Jud Heathcote's assistant. 'The first thing I want to tell you,' Vernon said to me that morning, 'is that I'm leaving. Nobody knows it yet, but I've just accepted a job at Wayne State. So I have nothing to gain by trying to get you to come to MSU. But I think you should. And I've heard that you have reservations about Jud Heathcote.'

'Well, I do,' he said. 'And if I didn't like him, or I thought he was a bad coach, I would tell you. But he's good, Earvin. Really good. I think you should play for him. I know you've seen him yelling at the guys. But that's because he's intense, and he wants to win so badly. Behind all that yelling and screaming, Jud Heathcote is a terrific coach and an excellent teacher. I've known you for years, and I've seen how committed you are to improving your game. This is the guy who can help you do that. Besides, if you come to MSU it'll be a great team. We've got Greg Kelser and all the other guys from last year. And you know we've signed Jay Vincent.'

After listening to Vernon Payne's description of Heathcote, I shocked myself -- and him too. 'Let's do it,' I said. 'Give me the papers and I'll sign.'

As soon as I made the decision, I felt good about it. My parents were overjoyed. The University of Michigan would be a contender with me or without me. But Michigan State would be a lot better with me.

A couple of days later, Coach Fox organized a press conference in the Everett auditorium. When I got there I was shocked to see reporters and film crews from as far away as Chicago and even New York. I was very nervous, but this was such an exciting moment that I was determined to enjoy myself. When I got up there to make the announcement, I started by saying, 'Any questions?'

That broke the ice. Then I said, 'I have decided to attend Michigan State University.'

The auditorium exploded with cheers and applause. 'When it came down to making a decision,' I said, 'I don't think I could have gone anywhere else. I was born to be a Spartan.'

In high school, when I had the ball, I would often jump without any real plan in mind. But Coach Heathcote showed me that our opponents actually wanted me to jump. They'd guard all my teammates, and I'd end up off-balance with nobody to pass to. 'Stay on the ground,' Jud would say. 'Nothing good can happen when you're in the air.'

But the biggest adjustment of all was the quality and intensity of the play. Michigan State was part of the Big Ten, which had some of the best college players in the country. With so much talent lined up against us, it's a good thing we had a great coach. Despite my earlier doubts about him, Jud Heathcote turned out to be terrific. He was a perfectionist, and he expected no less from us. You missed a shot? Okay, these things happen. But if you didn't do your job, like setting a screen or boxing out, or if you didn't run the play properly -- in other words, if you made a mental error, he showed no mercy. He'd point to his head and yell, 'You gotta think!'

The only thing he hated more than mental errors were excuses. 'Why didn't you box him out?' he'd ask. If you said, 'I missed him because I was covering the other guy and I couldn't get over,' Jud's face would turn red and his voice would go up high: 'I don't wanna hear that!' It didn't take long to learn that the only acceptable response to a 'Why didn't you' question was 'I blew it, Coach. It won't happen again.'

He yelled at us constantly. If you weren't executing the way he wanted, he'd explode. And it didn't matter whether you screwed up at practice or during a game. Some guys were affected by Jud's hollering, but it bothered me a lot less that I had expected. Sometimes it even helped -- I'd get mad at Jud, and then I'd take out my anger on the other team. I know a fierce competitor when I see one, and I respected his passion. He was burning to win, and yelling was the way he got there. All he cared about was winning, and I was the same way.

Our hearts were in sync, and so were our minds. The way we analyzed situations and players was often identical. When the game was close and time was running out, I always knew what play Jud would call -- sometimes even before he did. Off the court, Jud Heathcote was straight as an arrow. He followed the NCAA guidelines so strictly that we all thought he had written them. If you wanted a Coke from the soda machine and you didn't have any change, he wouldn't give you a nickel. If it was ten degrees below zero outside and you needed a ride back to your dorm, forget it. It's not that Jud was mean, because he wasn't. But he always obeyed the rules, even when they were ridiculous. He had built his reputation on integrity, and he wouldn't do anything to jeopardize it. He was that way about everything. If you didn't show up to every class and every study hall, you couldn't play. We always had a curfew the night before a game, but I don't remember what the penalty was if you were late. As far as I recall, it never even came up. Jud was the most impatient man I'd ever known.