Feature: Of Tragedy and Patriotism 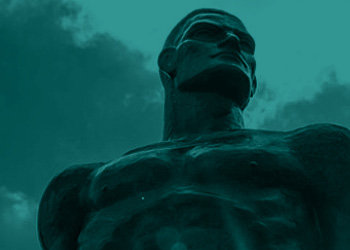 Dr. Steven Karageanes drove from the Detroit area to New York on the night of the September 11 terrorist attacks to help with medical and rescue efforts.  In this powerful essay, he shares some of his experiences and thoughts, as well as photos he took at Ground Zero.

I never considered myself much of a patriot. I groaned when my wife bought me a USA 2001 T-shirt for the Plymouth Fourth of July parade. Such shirts seem brash and goofy. What kind of American spirit exists in a country where anyone does anything for a buck or TV appearance? Where our country's freedoms are used only to defend foul-mouthed rappers and allow refugees from the rest of the world into our cozy bastion of liberty and prosperity?

I wore that goofy shirt the whole time I worked at Ground Zero. How quickly our sense of security, and our conjured-up crises-du-jour, have become distant memories.

As a primary care sports medicine physician, I thought I could be of service when the Sept. 11 atrocity hit. I drove through Tuesday night to get there, and spent 33 hours at a medical triage set up right in front of the piles of rubble.

The last survivor was pulled out as I arrived on the scene around 10 a.m. Wednesday. I was not prepared for the scope and magnitude of the damage. It looked like a volcano erupted in Manhattan, producing a constant stream of smoke and leveling everything near to it.

Everything had been coated in soot and paper, appearing relatively sterile, except for the unfathomable piles of steel and cement. Any bodies found were put into body bags immediately. Some bags just had formless lumps sagging in the middle as rescuers carried them by.

We did not treat any survivors.  However, we met many victims:

For everyone else, time will distance us from this tragedy. Society will get back to normal, and our complex lives will reabsorb us. Violent movies will still be made, David Letterman will still have his Top Ten lists, rappers will still wage First Amendment protests to defend their right to become rich, and sports will still play on.

So the greatest challenge facing our nation is making this tragedy count. It is not extracting swift retribution, killing Osama bin Laden, or steering the economy back on track. Those will be difficult tasks, no doubt, but they will be the charges of the government and military. The rest of us will have peripheral roles at best in those tasks.

Instead, the terrorism must make a meaningful change in our lives, or those who suffered and perished will not have mattered to our country. They certainly do matter for those who worked with them, cared for them, loved them.

It will be left to each individual to make this tragedy meaningful and not just an encyclopedia entry.

Remember the spirit of our nation, how people responded spontaneously en masse.  Flags sold out everywhere, millions of dollars pouring in to aid the rescue and recovery. Police traveling over 10 hours just to help pick through garbage on the New Jersey side of the Hudson River, hoping to find even one clue.

Never forget how the sports world was completely shut down and rendered irrelevant. Nothing has ever illustrated more eloquently that "it's just a game."  The finest display of teamwork and leadership ever seen occurred not in the Bronx or Shea Stadium, but in lower Manhattan, where the stakes were high and the pressure was unbearable.  Think of that the next time you see a dad screaming at a referee for a bad call.

Remember the spirit of individual communities gathering, consoling, and comforting each other. Look around and see how many ethnicities you encounter daily, then remember that 80 countries lost their own in the New York attacks. Racism suddenly seems rather silly.  Now let's teach this to our children.

Forget about returning to normal. Let's make it better.

Dr. Steven J. Karageanes, D.O. ’95, is a sports medicine and orthopedic specialist at the William Clay Ford Center for Athletic Medicine at Henry Ford Hospital and an assistant team physician to the Detroit Tigers. This was originally published in the Detroit Free Press on September 26, 2001 and is reprinted with permission.

As news of the attacks on the World Trade Center and the U.S. Pentagon spread, MSU students, faculty and staff mobilized in an outpouring of support and outreach.  They vigorously supported efforts by the American Red Cross, including two blood drives on campus. Student needs were promptly addressed, as well efforts to ensure the safety of diverse ethnic groups represented on campus.

More than two months later, when MSU’s basketball team played in the Preseason N.I.T. finals in Madison Square Garden, Tom Izzo tried to arrange for the players to visit Ground Zero as part of their learning experience.  Many classes now incorporate study and discussion of the terrorist acts that destroyed two skyscrapers, four passenger planes and parts of the Pentagon, and with that destruction, put an indelible mark on the American psyche.

On the night of Sept. 11, about 1,200 students gathered around The Rock for a "Remembrance and Reflection" vigil, sponsored by the Associated Students of Michigan State University.  President Peter McPherson and several students leaders spoke.  Throughout the residence halls and apartments, meetings were scheduled where students could share thoughts and feelings.  Counseling services were made available at the MSU Union and the International Center, with the Counseling Center, MSU Healthteam and Dept. of Psychiatry providing resources.   4-H Youth Development staff pulled together a Children, Youth and Families team, providing resources to help local staff respond to community concerns, especially regarding young children.  The resources continue to be available via MSU Extension.

On Sept. 14, the National Day of Prayer and Remembrance, nearly 4,000 students, faculty and staff gathered in the Great Hall of Wharton Center for an Interfaith Service of Remembrance.   Speakers included The Rev. Lester Stone of Friendship Baptist Church; Mahmoud Mousa, president of the Islamic Center; Ajahn Khemasanto of the Dhammasala Forest Monastery; Nigel Paneth of the Congregation Kehillat Israel; and Reverend Randall Knauf of St. John's Student Parish.   Across campus, hundreds gathered around Beaumont Tower for a carillon concert.  Carillonneur Sally Harwood played rendition of Amazing Grace, America the Beautiful, and The Star-Spangled Banner.  Throughout the campus, students watched the service held at the National Cathedral.   At 1:00 p.m., the MSU community observed 15 minutes of silence.

During Homecoming Weekend, rescue workers from the Fire Department of New York (FDNY) and the New York Police Department (NYPD) were honored.   Michael Cantwell (FDNY), Kevin Gorman (FDNY), Peter Jacoutot (NYPD) and Benito Barrerio (NYPD) rode in the Homecoming parade on Friday, Oct. 12, accompanied by local firefighters and police officers.   On Saturday, they were featured at the MSU Alumni Association’s pre-game tailgate brunch at Kellogg Center and also in the pre-game ceremony at Spartan Stadium.

A special collection was taken during the Homecoming game—MSU’s first home game since the attacks—to benefit families of NYPD and FDNY members who died during the rescue effort.

Other campus activities and efforts surrounding the tragedy included:

For complete news on MSU’s reaction to the Sept. 11 terrorist attacks, visit www.msutoday.edu.