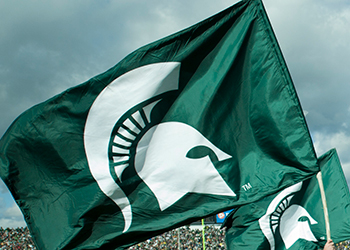 Justin “Bugsy” Sailor, ’06, is a dreamer. But perhaps even he didn’t believe his 2010 New Year’s wish would become a reality. Yet that didn’t stop the skillful self-promoter and social media whiz from mounting an off-beat and popular online campaign from his Upper Peninsula digs.

He’s the globally famous British entrepreneur, billionaire and force behind 400 companies, not the least of which is his Virgin Galactic, the entity building aircraft on which intrepid adventurers of means can experience space travel.

Sir Richard is a very busy man. But thanks to serendipity, he just happened to be headed to Michigan last month to address the Economic Club of Grand Rapids.

That put Branson within Bugsy’s orbit. The MSU alumnus started working his network. He pushed out his website with fervor. A creative marketer saw it. He shared it with a TV network, which contacted a woman with the Economic Club of Grand Rapids.

She agreed to broach the meeting idea with Sir Richard’s people—who happened to be familiar with Bugsy’s website.

Branson agreed to meet Bugsy, who on the big day set up a couch in the hallway of beautiful DeVos Place, a meeting center. Bugsy provided two craft beers, both brewed in Michigan.

Branson popped in and perched on the edge of the sofa. He sipped a dark brew with Bugsy, who asked the futurist who he’d he’d most like to have a beer with. “Well, young entrepreneurs like yourself,” Branson said.

It was over in the blink of an eye. But it’s a moment Bugsy will remember forever.

Learn more about Bugsy at his other social media outlets. His blog is at www.bugsy.me. His Twitter account is https://twitter.com/BugsySailor. He’s also on Facebook at https://www.facebook.com/bugsysailor.