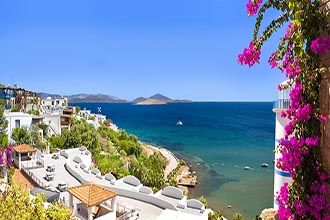 Taste the exotic flavors of the eastern Mediterranean and the Black Sea on this 10-night cruise aboard Oceania Cruises’ Riviera. From Istanbul to Athens enjoy the traditions of Bulgaria, Romania, Turkey with Ukraine sprinkled in. Planned specifically for the culturally curious, this cruise seeks out authentic experiences of lesser-known European cultures and explores their Greek and Roman roots in depth. Catch folk performances, village visits, and food tours set against a Byzantine backdrop of onion-domed cathedrals and ancient ruins. In Odessa, the Potemkin Steps welcome visitors up to the graceful Prymorsky Boulevard, and in Turkey, the ancient ruins of Ephesus come alive along marble roads carved with chariot marks. Top it off with island hopping through Greece: snap a photo of Santorini's indigo-domed churches clinging to stony cliffs along the caldera, and sip ouzo among the glitz and glamour of Mykonos.