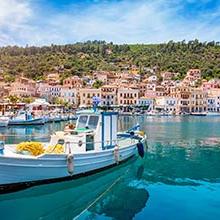 Join Dr. Jon Frey as you explore Greece’s cultural riches, from the glorious remnants of ancient civilizations to a palate-pleasing bounty of wine, olives and seafood, await you on this eight-night journey to Athens and Gytheio. Ascend the Acropolis to admire the Parthenon and sweeping views of Athens. Explore the fortified Bronze Age citadel of Mycenae and discover a one-of-a-kind treasure, mountainside Mystras, an important center of Byzantine culture. On your way to Gytheio catch a glimpse of the Spartan statue of Leonidas! During your stay in charming, seaside Gytheio, enjoy coastal life and get to know the Mani, a region known for its independent spirit, stone tower houses and beautiful beaches, plus journey to Monemvasia, a stunning, medieval walled city on an island. A wine tasting and a fun-filled dinner with music and dancing complement this well-rounded, small-group experience. You’ll also learn about Greek history, from classical to contemporary, during enriching lectures with experts. Includes deluxe and first-class hotels and a generous meal plan with wine at dinner.

*A minimum number of participants is necessary to send the faculty host.

Jon Frey is a classical archaeologist specializing in Greek and Roman architecture, with an interest in construction processes and the phenomenon of material reuse in post-classical antiquity. While the majority of his fieldwork experience is in the area of Greece known as the Corinthia, over the past two decades he has also worked in Egypt and on the islands of Crete and Kythera. As the Director of the Michigan State University Excavations at Isthmia, he led a team of researchers engaged in the use of digital tools to explore and publish the evidence about the ancient world contained in archaeological archives. Jon received his BA in Ancient History and Classics from Ohio State University and his MA and PhD from the University of California at Berkeley. He has been an Assistant Professor jointly appointed in the Department of Art and Art History and the Department of French Classics and Italian at MSU since 2007 where he teaches courses on the Classical World, Classical Mythology, Ancient Art and Greek and Roman Art and Archaeology. He is excited to share his knowledge of Greece and the research he has conducted in the region.