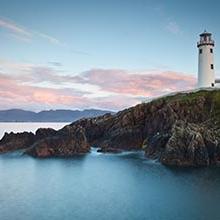 Explore the gorgeous green coasts of Ireland on an 8-night cruise aboard Oceania Cruises’ Riviera. Begin in Belfast and set sail for Dublin (Dún Laoghaire), the birthplace to some of the world’s greatest literary figures. Stroll through Waterford, a 1,110-year-old Viking town and the oldest city in Ireland.  Explore storied castles outside of Cork and Bantry Bay, a region where whisky distilleries, fishing villages, and Irish pubs uphold strong traditions. Venture to the countryside of Galway to take in the dramatic Cliffs of Moher. Explorethe town history of Killybegs and see the world’s largest knotted loom. Before making your way back to Belfast, visit Derry, known for the in-tact 17th century walls surrounding the city center.