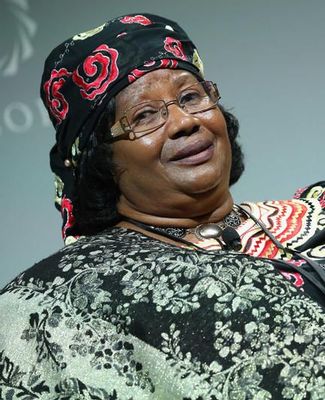 Malawi’s first female president, Joyce Banda, came to power under peculiar circumstances. She was never elected as president, but as the country’s vice president she ascended into power after her male predecessor, Bingu Mutharika, died in office.

At the time of her installation, Malawi was going through turbulent times. The country was in the midst of a deep economic crisis and had undergone a process of serious democratic erosion. To make matters worse, the government had fallen out with the international donor community.

In this interview, President Banda and Michael Wahman discuss the obstacles to women's political leadership and the symbolic importance of a woman president, but also some of the limits that women leaders face in promoting fellow women while in power.

The legacy of Banda’s presidency for women in Malawi politics has been debated. President Banda herself was voted out of power in 2014 amid plummeting approval ratings. For the first time since the introduction to multipartyism in 1994, female parliamentary representation also declined in the 2014 parliamentary election. These findings correspond with other research suggesting that women presidents and prime ministers may not be more prone than male leaders to advance the political careers of their fellow women.

Still, in a new article by MSU researchers Michael Wahman and Nikolaos Frantzeskakis,  published in the American Political Science Review, the political scientists argue that President Banda advanced the role of women in politics in a less obvious way. Studying debates in the Malawi parliament, they find that the Banda presidency was associated with a significant increase in the number of speeches delivered by female lawmakers. They argue that the change in female parliamentary behavior is an indication of intra-elite role model effects and that Malawi can teach us a lot about the symbolic importance of women presidents.

MSU Today airs Sunday mornings at 9:00 on 105.1 FM and AM 870 and streams at wkar.org. Find “MSU Today with Russ White” on Spotify, Apple Podcasts, and wherever you get your shows.
Contributing Writer(s): Russ White, '82, '01
RETURN TO STORIES