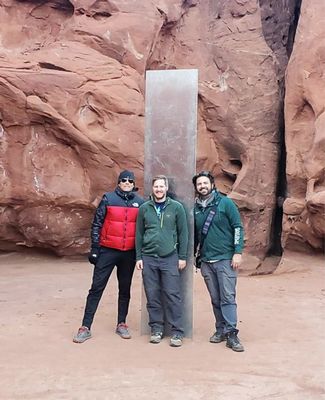 Utah’s triangularly metallic cause célèbre — the “Monolith” — was recently discovered by a sheep-counting Utah Division of Wildlife Resources helicopter pilot in a remote part of the desert between Canyonlands National Park, Monticello and Moab, Utah.

The Monolith’s discovery immediately evoked the mysterious black obelisk in Stanley Kubrick’s 1968 classic film “2001: A Space Odyssey” — and became an overnight worldwide sensation, capturing the imagination of millions. News and social media were abuzz with outlandish and sensationalistic speculation that the mysterious Monolith was the extraterrestrial work of aliens, an unknown artist(s) or merely a marketing stunt.

Reactions, though varied, were vigorous, unambiguous and quick. The sheer existence of the mysterious obelisk struck a chord with Instagram, YouTube and social media “influencer” types, nature enthusiasts and urbanites both near and far. At a time when cohesion was elusive, an unknown artist, at an unknown time, extended an opportunity yearned for, resulting in dialog, debate and collective wonder during unpredictable and uncertain times.

Whimsically — a mere two days prior to Thanksgiving — I texted two fellow Spartans, RJ Banat and Alan Heath, both of Denver, Colorado, to gauge interest in a spontaneous trip to Moab over the long holiday weekend. Both responded affirmatively, enthusiastically, and instantaneously. “I’m in,” replied Banat, “Are you in, Alan?” he texted to the group.

“I can leave at 8 p.m. on Thursday,” Heath quickly replied, “right after we finish dinner.”

Banat, the owner of Jagged Mountain Brewery in downtown Denver, suggested canyoneering in Leprechaun Canyon near remote Hanksville, Utah. Next, Heath mentioned an off-road adventure in our Jeeps and proposed several full-day, off-road options to the group.

Me? I was up for anything — Moab is, after all, a giant slickrock playground with seemingly endless opportunities for outdoor adventures.

Offhandedly, I asked “Where’s that Monolith?”

Discussion immediately shifted and the group focused on identifying the Monolith’s location. We knew it was somewhere in southern Utah, but initially did not know where (or how close it was to Moab). Individually, we scurried through Google search results until Banat located the GPS coordinates online. We also discovered a Reddit thread detailing its exact location. From there, Banat and Heath researched various routes to the Monolith.

Heath plotted our course via Lockhart Basin Road, a roughly 60-mile point-to-point, moderately rated off-road trail beginning in Moab. He decided on Lockhart Basin Road because it would combine an off-road excursion while allowing us to see the Monolith. Heath estimated that the Monolith was approximately 40 miles south of Moab via that route. We departed in the morning (a bit later than expected) on Black Friday from Moab in search of the Monolith. 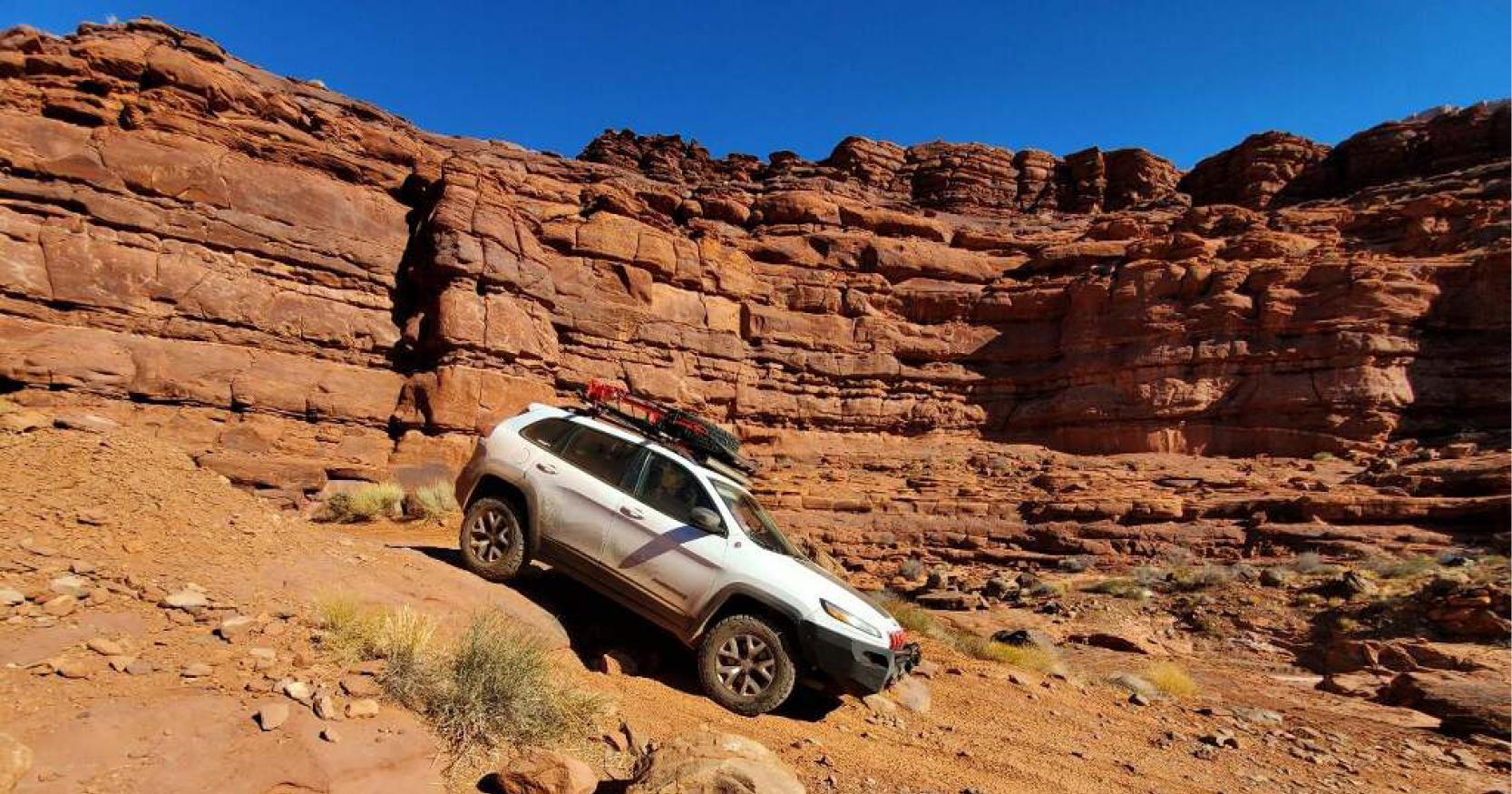 Tracking down the monolith required going off the beaten path. 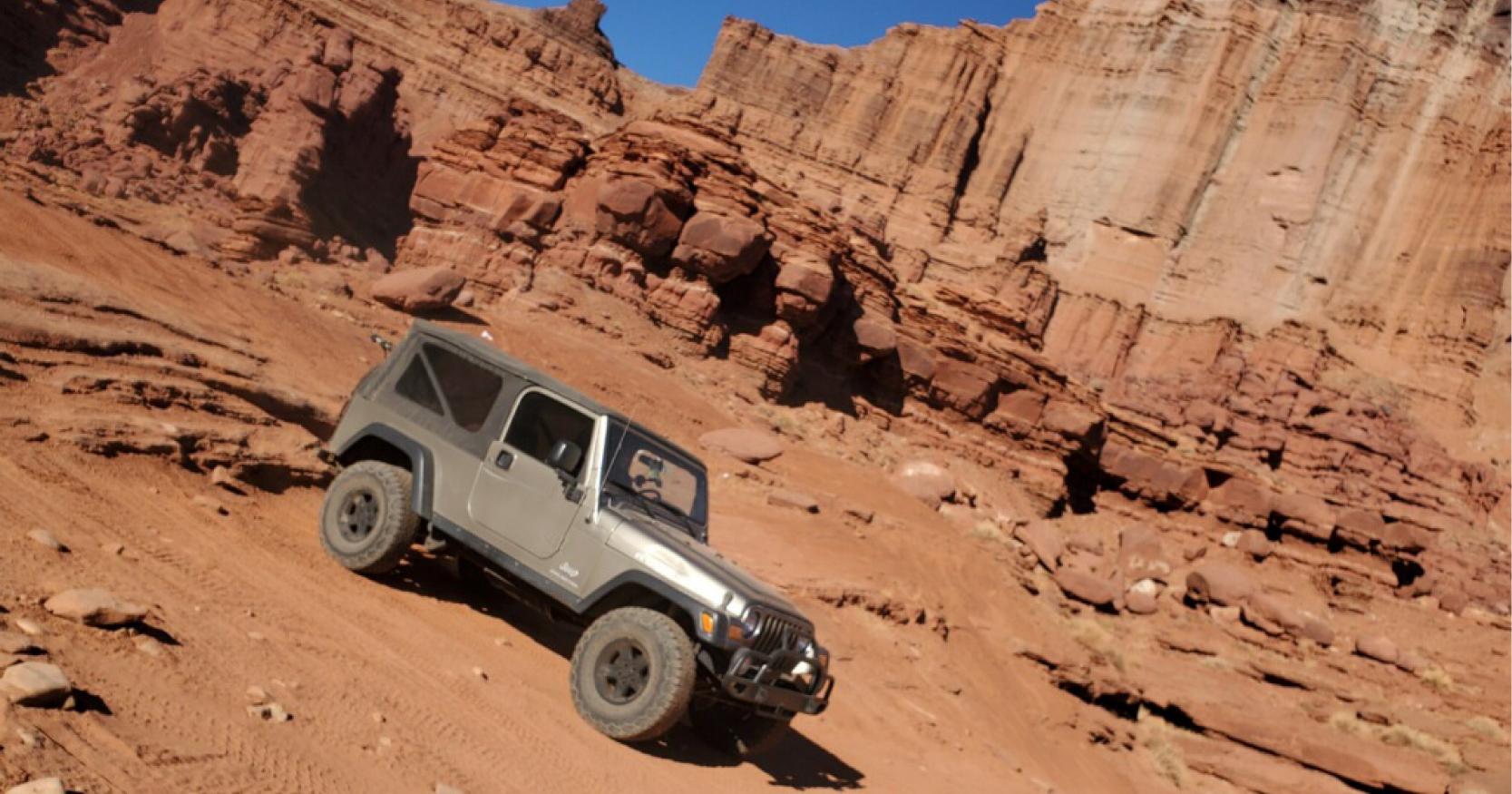 The journey was arduous and tedious — Lockhart Basin Road was significantly more technical than described online. There were several long sections of rock crawling/climbing that required skilled off-road driving experience. The stretch from Chicken Corners to the plateau was particularly grueling, with many nearly impassable sections with a stock 4x4 or Jeep. At one point, we seriously considered turning back, frustrated by our slow pace and concerned about having to spend the night in the cold, remote desert.

Nevertheless, with dusk quickly approaching, we pressed on and arrived at approximately 4:30 p.m. Several vehicles were parked along the narrow remote desert road, all high-clearance vehicles, along with two Bureau of Land Management trucks. The road was a sandy, narrow “single-lane” on flat desert plains with sagebrush and saltbush scattered in the reddish soil juxtaposed against monstrous canyon walls. There were several social trails leading to the Monolith’s home in the narrow canyon, which was approximately a quarter-mile from the road. 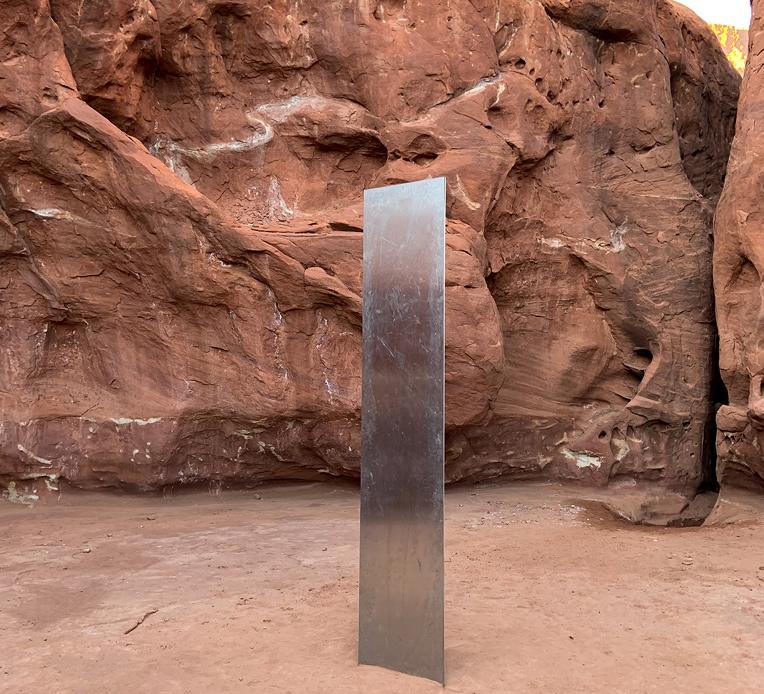 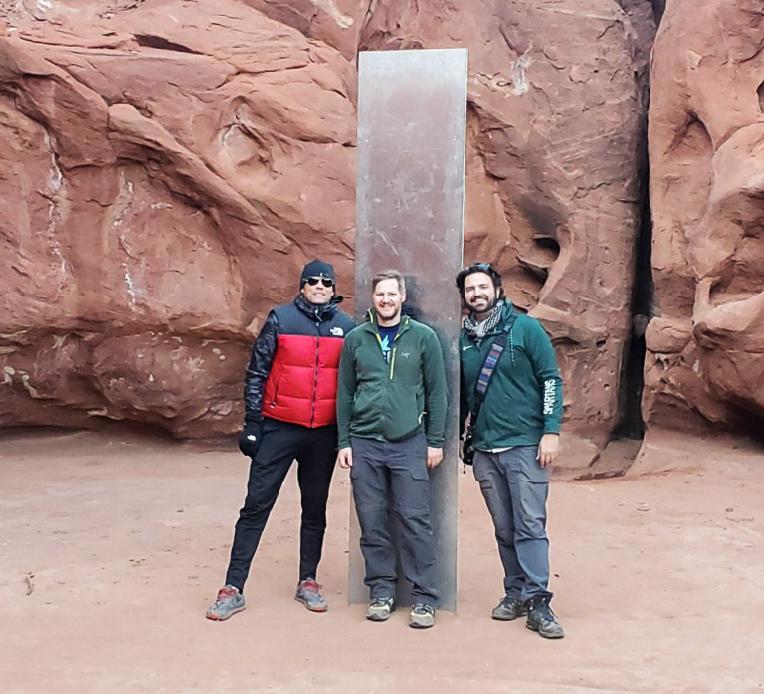 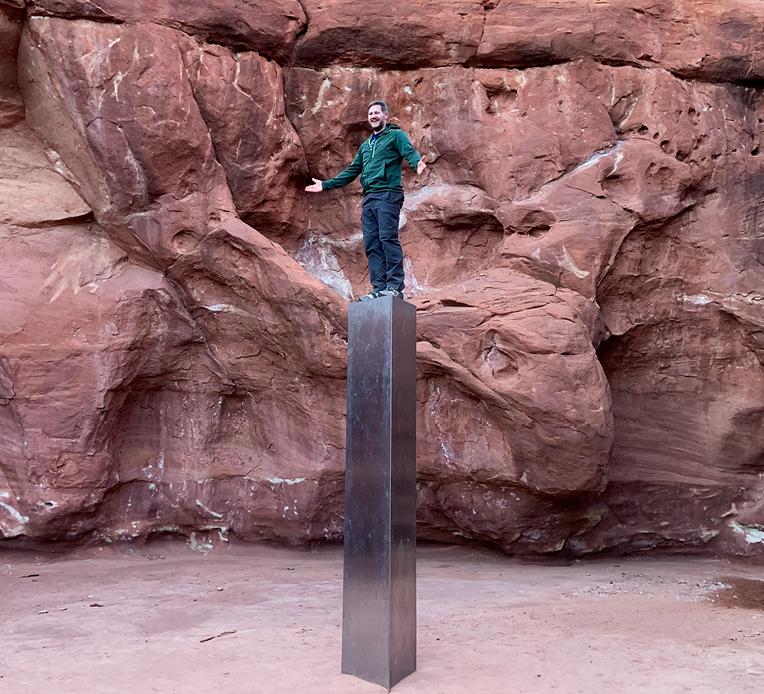 “Wow, I absolutely love it,” said Heath, marveling and carefully studying the smudgy obelisk. “This was placed here intentionally,” he continued “…the setting is just perfect.”

Banat and I agreed. “It fits perfectly here from so many perspectives” Heath added.

We took pictures, casually walked around the site, and reflected. Banat climbed it and stood magnificently atop the Monolith. “If you told me in January that I’d be out in the middle of the Utah desert staring at a mysterious metal obelisk during the middle of a global pandemic, then I’d say you were crazy,” said Heath.

At dusk, we — along with the dozen or so others, and the two Bureau of Land Management officers — decided to leave. We climbed on the curvy slickrock, watched the sunset stretching across the vast desert sky, then got into our Jeeps and left. It was the perfect ending to a perfect day.

The following day, after canyoneering in Leprechaun Canyon, we learned that the Monolith was gone.

Andy Lewis and Sylvan Christensen, two local Moab climbers, slackliners, and BASE jumpers, dismantled and removed the Monolith from its home in the canyon a mere few hours after we left on Friday night. A YouTube video posted by Lewis shows images and video footage of the Monolith’s harsh demise.

Christensen also posted a statement on Instagram explaining their reasoning for removing the Monolith. He said that the Monolith was removed because the “land was not physically prepared for a population shift… caused by internet sensationalism.” He also noted that the unknown artist responsible for erecting the Monolith gorged the sandstone, causing irreparable damage.

While I agree, generally, with Christensen’s reasoning, I find Christensen’s vigilantism troubling and hypocritical. The Monolith’s fate should have been decided by the Bureau of Land Management, not a rogue group of vigilantes whose own conduct has come under intense criticism for endangering precious desert lands. In December 2016, Lewis was among a group of climbers who strung Christmas lights above a fragile and iconic twisted summit called Ancient Art. In 2014, Lewis was fined for illegally BASE jumping in Arches National Park.

Although an art collective called The Most Famous Artist has come forward claiming to have erected the Monolith and is now offering replicates for $45,000, I have my doubts. According to internet sleuths, the Monolith was erected years ago. The San Juan County Sheriff’s Office confirmed that the Monolith has been at its location for many years and stated that a rancher with use permits to the Bureau of Land Management land where the Monolith was discovered has known about it for a number of years.

We may never learn who is responsible for the Monolith or why it was erected in the remote Utah desert. But, I am fortunate that I was able to experience it and truly appreciate the opportunity to share that experience with my fellow Spartan friends.