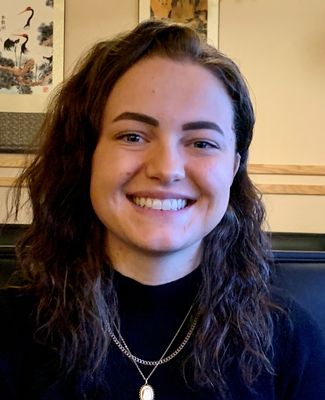 You might need to thank Bailey Korkoske, a 2019 MSU grad, the next time you have salmon for dinner. She cares for the salmon at a private, nonprofit hatchery association based in Cordova, Alaska

From her perch aboard the 18-foot aluminum skiff, Bailey Korkoske reaches for a five-gallon bucket of fish feed pellets to feed several million young sockeye salmon corralled in net pens in Alaska’s Prince William Sound, just a half mile from shore.

Then she’s up on the walkway surrounding the pens to begin feeding.

Around her, on any given day, from February through April, may be bald eagles, seagulls, otters and whales, all hoping for food, while she uses a Bluetooth speaker, encouraging the fish to eat.

“I talk to the fish all the time,” says Bailey, who identifies as a “fish mom,” in a job that takes her from the egg take stage of salmon life to watching their harvest in Prince William Sound.

“They grow up and you are there watching them grow every day. It’s a privilege.”

She’s also busy yelling at crows trying to steal food from pellet bags on the skiff.

Feeding time increases as the salmon grow. “By the end of April, those fish are feeding on 1,000 kilos a day of pellets.

All in all, Bailey says, despite weather conditions that range from sunshine to pouring rain or snow, “it’s like a perfect Alaska moment, surrounded by mountains, fish jumping, even if the weather is subpar. It’s like this is what you came to Alaska for. It’s a really cool place, a really cool job.”

Bailey was a senior majoring in environmental science in December of 2019 when she applied for a job as a fisheries technician with the Prince William Sound Aquaculture Corp., a private, nonprofit hatchery association based in Cordova, Alaska. Offered a temporary, full time job, she arrived in February. In May she was hired full time.

The first few months were a learning experience, learning all the timelines for how sockeye salmon grow and develop, she said. Her multiple tasks as a technician at PWSAC’s Main Bay Hatchery range from doing the critical egg take in July to feeding the fish in net pens from February through April.

The sockeyes are transported from the hatchery to the net pens at 18-month-old. After three months they are released into the ocean, returning to Prince William Sound three to four years later to spawn and die, but also providing an abundant harvest for commercial, sport and subsistence harvesters, plus hungry wildlife.

“We are feeding the whole ecosystem,” said Bailey.

Upon their return in July, many of the sockeyes swim up a fish ladder with water flowing through it. That’s where Bailey and others hand extract eggs to breed the next generation. “We hand check every single fish,” she said. “You have to tickle their bellies and the eggs come out.”

Less than a year later, she adapted.

“It’s a great place to learn minimalism,” she said. When supplies run out, especially in winter, the Main Bay crew just has to wait for the once-a-month supply boat to come in.

What does she miss most?  Foods like sushi, and going to dive bars to live music, like Indy bands.  But yes, she said, the hatchery now feels like home.