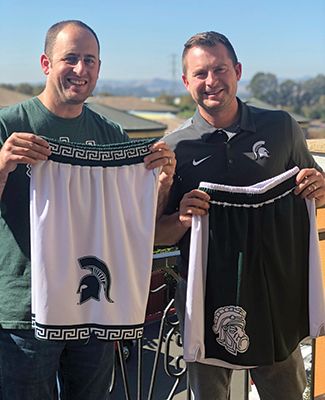 Aaron Loomer and Chad Amo bring tangible connection to some of college basketball’s most iconic teams, including the two championship Spartan squads.

Right down to watching the championship game against Florida in Chad’s Case Hall dorm room, I remember every moment of that championship season,” Loomer beamed.

Today, as one half of the founding quartet of 19nine, Loomer and Amo have resurrected that vaunted Spartan squad and a number of college basketball’s most revered teams, including the Magic Johnson-led 1979 MSU group, with vintage apparel, most notably replica uniform shorts—thankfully, gratefully—cut in modern lengths.

“From Magic and ‘The Flintstones’ to so many others, our gear is a tangible connection that brings fans back to some of the most iconic moments in college basketball history and awakens deep emotional ties,” Amo said.

Initially a T-shirt company founded in 2011, 19nine moved into the college licensing space in 2013 before squarely focusing on hardwood history with its 2015 acquisition of Retro College Cuts, a New York City-based manufacturer of nostalgic basketball shorts. That deal provided 19nine the runway to grow nationally with a differentiated product dedicated solely to celebrating NCAA hoops. And not surprisingly given Loomer and Amo’s MSU ties, Sparty emerged a top priority.

On a Thursday morning in 2015, Loomer ventured up to East Lansing from his Indianapolis home for a meeting with MSU’s licensing director. After securing an agreement that allowed 19nine to recreate gear from cherished Spartan squads, Loomer celebrated with a mid-afternoon visit to The Riv for Burgerama.

Soon after, 19nine released replica versions of the white shorts Magic & Co. wore in 1979 before later debuting green shorts from that same championship squad and the distinctive white bottoms from the 2000 team.

“MSU was the ultimate get for a pair of Spartan loyalists like Aaron and myself,” Amo said, teasing “a long list of other Spartan shorts [he’d] love to bring to market.”

It’s been a lot of hard work to get to this point, but a complete labor of love.

Looking to add about eight new schools to its portfolio each year, 19nine’s current focus rests in gaining a deeper foothold on the East Coast and with schools from major conferences.

The company is also exploring new collaborations like a recent partnership with former MSU standout Adam Ballinger --which brought the letterman’s whimsical caricatures to 19nine T-shirts.

QUOTE “There’s no shortage of inspiration in the college basketball marketplace and we’ll continue digging for the right stories and teams we can bring to life with great detail and authenticity,” Loomer said.